The tennis and the weather were fantastic for last weekend’s 7th Annual Owen Schlosser World Team Tennis (OSWTT) Fundraiser at the Outdoor Tennis Centre in Edmonton! The event since it’s inception in 2011 has kickstarted Edmonton’s outdoor tennis season bringing together all levels and ages of players – this year was no exception.

The OSWTT event funds the Owen Schlosser Memorial Tennis Scholarship which provides financial assistance to the Golden Bears and Pandas tennis teams. The scholarship was started in honor of Owen Schlosser, a member of the University of Alberta Golden Bears varsity tennis team, whose life tragically ended in June, 2009, just prior to his 22nd birthday, after a valiant battle with cancer. In Owen’s memory the team hopes to become the dominant University tennis program in Canada. 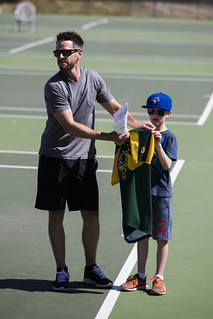 Corey Stewart, Golden Bears Tennis Coach, shows Owen’s initials are on the sleeve of the Bears and Pandas tennis team competition uniforms and explains how important Owen has been for the varsity teams and the surrounding tennis community.

Creatively named teams competed in 3 divisions: Recreational, Intermediate, Competitive. However, the opportunities to play and participate in the event were not limited to the main draw.

The Unicorn Sparkle Party competitive team stole the show again with their coordinated unicorn horns that surprisingly stayed up throughout rallying, volleying, and serving. 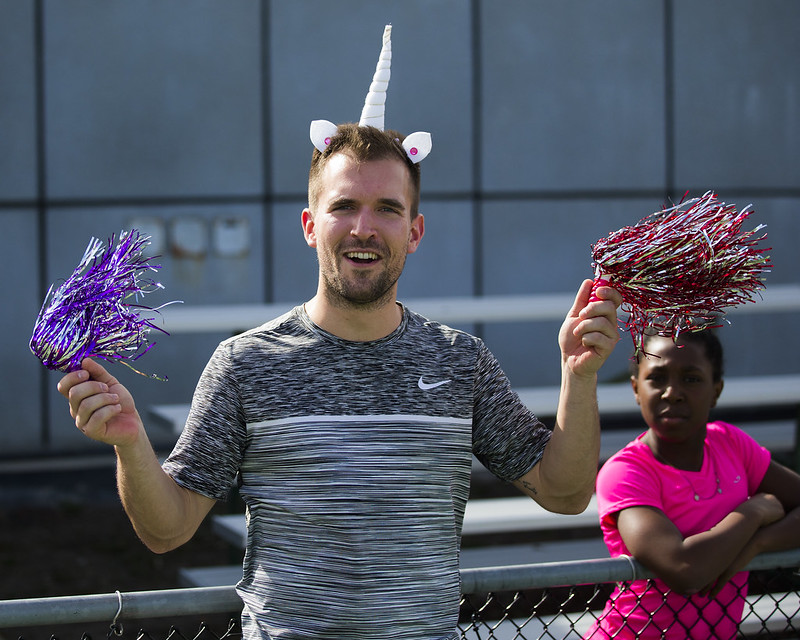 Josh Sundwall cheering on his team

This year’s brand new charity game called Play a Bear gave event attendees the opportunity to donate for the chance to play and win prizes from a Golden Bear tennis team member.

The one point eliminator tournament saw yet another great turnout of more than 60 players, young and old, playing one point matches for their chance to meet the defender of the event, Carson Bell. Congratulations to Saville’s Tennis Manager, Russ Sluchinski, for defeating Carson and winning this years OSWTT one-point eliminator title. 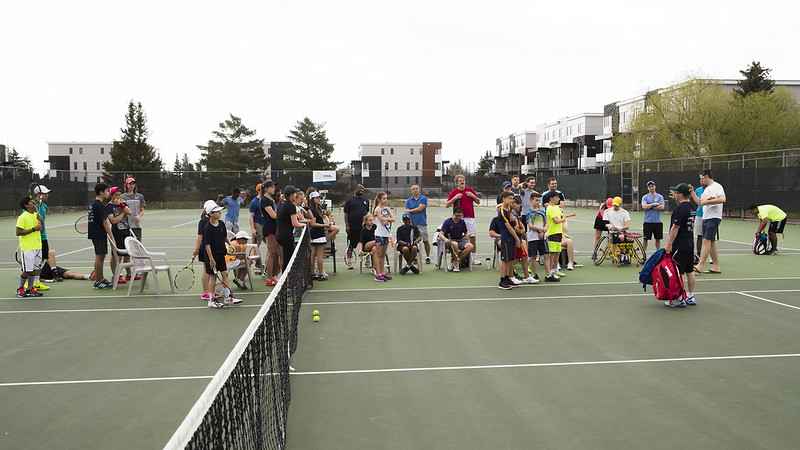 The OSWTT hosted yet another amazing fundraising silent auction with a great selection of donated items put up for auction that included tennis gear, tech, art, and of course private lessons from some of the top pros in the Edmonton community.

Anddddd the winner of the Gold Intermediate Division at the 7th annual @OSWTT is… "All Four Hands"! pic.twitter.com/EdzipDgX4O

Congrats to the Competitive division champions of the @OSWTT, the Ladybugs! That's a wrap on the 7th annual OSWTT Fundraiser! pic.twitter.com/bBOBcbAMcH

Many thanks also go to everyone who participated in the event, as well as all the volunteers. A special thanks to Don Voaklander for taking pictures all weekend long and making the event’s album possible!