A Weekend to Remember at the Saville’s Owen Schlosser Tournament A hot, sunny weekend was the perfect backdrop for the Owen Schlosser World Team tennis tournament.  The Golden Bears and Pandas hosted a busy four days at the Saville Outdoor Tennis Centre in Edmonton.  This 8-year-old event showcased the depth of Edmonton’s tennis community, and offered something for everyone.

An event with a purpose

Many at the tournament had been a friend of Owen Schlosser, the young Golden Bear tennis player who passed away June 2, 2009  at the age of 21 from melanoma.  Owen was present in the thoughts of those who knew him, and fond memories were shared.  The weekend was a reminder to enjoy each day, and to be grateful for the opportunity to play the sport that Owen loved.   His mother and siblings played in the recreational activities and witnessed the goings-on, adding a special touch to the day.

This tournament raises money for scholarships for Bears and Pandas, and for skin cancer research, as inspired by the life of Owen Schlosser.  Read more about Owen and his life. Leaders in the tennis community

Current and past Bears and Pandas were prominent throughout the tournament as organizers, coaches, and players.  Leading by example were Saville coaches Russ Sluchinski (Head Coach), Carson Bell, Ivan Quintero, Emil Kirchev and Josh Sundwell who were active on teams, managing the event, and donating their time.  Even the dedicated Saville organizers played on teams–Andrea Jones and Chad Molzan.  On Saturday the new Tennis Alberta Interim Executive Director Peter Ogilvie dropped by to shake a few hands and kiss a few babies.   The weekend was a testimony to the strength of the Edmonton tennis community and all of its various components–before (historically), now (its current leaders), and in the future (the youth). 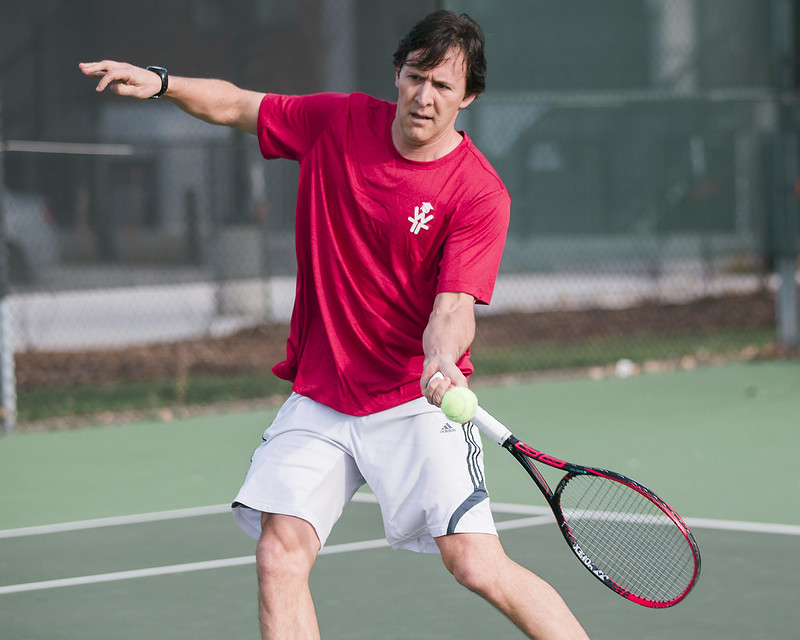 The weekend offered something for everyone–young ball girls and boys, Juniors, current and past Bears and Pandas, club players, a wheelchair athlete (with his dog and his family),  coaches, and the friends and families watching on.

Participation was diverse.  Two players from the Calgary Dinos women’s team made the trip to play on a team with the Bears (Kelsea Gorzo and Annamaria Donaldson).  Molly James, a former Panda, joined her brother Jeff to play the doubles tie as a brother-sister team.  Laurie Zalmanowitz, a former international player on the wheelchair circuit, held his own on team Courtside Connection.  David Rossolatos represented Tennis Alberta on a team with women from the Royal Glenora Club, and Laurie Zalmanowitz and Sudharshan Sundararahan from the Saville.

Former juniors Oscar Yang and Danny Wu challenged Bears in high level singles, doubles, and mixed ties.  U. of A. female athlete of the year Kristina Sanjevic (winner of the Bakewell Trophy) and Kirsten Pelle showcased their tennis talents in the final matches.  Alberta’s juniors enjoyed a lighthearted break from their competitive schedule.

A creative format with fun guaranteed

The tournament format  guaranteed a fun event with broad appeal. Teams were mixed, rules were funky.  Organizers worked hard to place everyone on a team.  And how about those team names–Casual Sets, Double or Nothing, The In Crowd, Tightly Strung, Serve Me a Double–creative or what?  Recreational clinics and matches, junior matches, and showcase matches were interspersed with team competition.

And the winners were

All in all this was a fantastically organized, attended, and played event.  And thank you, Mother Nature.

Question posed by a participant:  “Could the Saville host another one of these at the end of the summer?  That was the best tournament ever!”  Observer’s comment:  “It takes a lot of work, and they host a lot of tournaments!”

If you have ideas for articles, would like to write, or have comments, contact me at susan.wells@tennisalberta.com